We had everything planned out. Meet early, pack breakfast while TT settle the car, and leave on a weekday so there's no queue at JB customs. As we departed from the car rental office at 9+am, we were feeling quite smug about departing on schedule. Then...Ming and TT noticed a persistent draft in the car, and we discovered that the rear window would not close completely! Reluctantly, we U-turned (not that easy to do on some Malaysian roads), and headed back to JB town, concluding that we'll never start a roadtrip before 11am. Our 1st driver!
To save time, we did the ultimate sacrifice by eating at a highway stop instead of going to Melaka for lunch :). However, as we veered closer to KL, realised that we were pretty near KAJANG, and the famous Kajang satay we missed last time going to Nuang!! A quick round of consultations later, we concluded that no-one was in any particular hurry to ascend the mountain, and anyway, how often do you get the chance to go to Kajang? Note the flames rising from the BBQ pit- what you get when you ask a professional photographer to take pictures for you (thanks babe!)!

A closer look at the scrumptious satay grilling away- Doesn't this make you wish you had a stick of the sweet ikan satay right now? As we sat happily digesting away, suddenly remembered that there was a timing to ascend Fraser's...and we may not make it up there before dark! Ulp... grabbed half a chicken and some fresh food from the supermarket, and speedily headed towards Kuala Kubu Baru. Briefly pondered if we should top up petrol when we saw the Shell station opposite, then figured we'll just do it when we see one on the same side of the road.... Just too bad for us then that there were NO MORE petrol stations from then to Fraser's! Driver #2!
Stopped at the new dam visitor centre for a much needed pee break and look around. Much of the forest along the left side of the road was flooded for this project...hope that's all that's needed and that the other rivers will remain as they are.

We actually made it to the Gap just in time to join the 7pm queue! All while looking at the fuel gauge trying to estimate if we had enough gas to make it down. The road up was much wider than I remembered from 2002- recently renovated?

When we reached our destination of the night, the air was chilly and Pekan bungalow looked completely deserted. Tsk...we drove all the way here to sleep in the car? Poked around the caretaker's lodgings at the back and peeked into the office- all dark and empty... Finally decided to knock on the door of the only occupied room in the house and enquire politely as to the whereabouts of the caretaker. Turned out the caretaker herself was staying there...

We were the only people staying there for the week! The whole bungalow was ours! Hahahah... Decided to take a brisk invigorating walk before preparing dinner, so after 10minutes of looking around the town centre, we headed back to the bungalow... No cooking was allowed in the rooms...but they didn't say anything about the balcony (hee...), so we had chicken herbal soup (boiled for 1 hour, no less), stir fried xiao bai cai, sauteed mushrooms, and freshly cooked rice. No photos as I was busy lah! Ended off with dessert of peanut soup and nata de coco (grape and mango).

Wake up call was bright and early at 7.30am today, for we expected to hike at least 9 hours on the longest trail in Fraser's Hill- the 6km (one-way) Pine Tree Trail! It really took a lot of effort to kick TT and Babe out of bed though, after much groaning and whining.

A quick breakfast at the town centre later (no roti canai, only suspiciously cold nasi lemak and mee goreng), we were on our way, reaching the trail head at 9am.

Bright and cheery at the start of the trek! We were all togged in long pants tucked into socks as we had heard much about the infamous leeches of Fraser's, known to proliferate throughout the trails and drop down on hapless humans from overhead vegetation. A bit obiang maybe, but who cares?? In our pockets were one jumbo and one small bottle of medicated oil and a bottle of Cuticura, which is pretty good at killing the suckers.

The first clearing we came to, we stopped to admire the view: Luckily also, there weren't that many leeches. I had 3, TT had 1, and Ming was the only blood donor of the day. We concluded that the other leeches must be so nuah because of the cold weather. Nothing like the ferocious Tahan leeches. 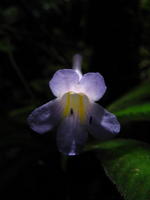 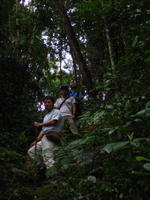 For some reason, the guys decided to walk very fast, and we reached the peak in 3 hours (published time 4 hours). As I paused to catch my breath after the vertical scramble, spotted a Greater Yellow-crested woodpecker lurking about the moss covered trees (thanks Ming for the ID). No pictures folks...3x optical zoom is still not good enough. 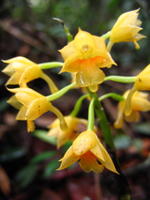 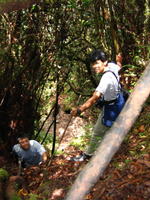 One last push before the summit...

On the way up, Ming and Eric got into an INCIDENT, as Eric tried to speed up on the ascent with Ming still in front of him. Apparently, Ming was slower than Eric expected, so as he suddenly decelerated, his hand swung forward, and he allegedly COPPED A FEEL......Naturally, you can imagine Ming to be extremely outraged, and swearing never to walk in front of Eric again, all the while muttering something about sharpening his walking stick under his breath... 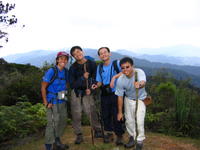 So we sat on the peak and looked back at all the ridges we climbed and descended (imagine a reverse of the earlier photo) (Background conversation:"You mean that's Fraser's?? How can??? It's so far!!..."), and had a much welcomed lunch of Kraft cheese sandwich with romaine lettuce and tomatoes, and a lunchbox of mashed hardboiled eggs. Too bad no cold drinks only... 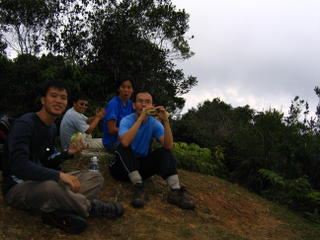 Dark clouds omnimously heading towards the Pine Tree peak got us up and moving again, still at a pretty fast pace, back to the trail head. The skies opened 2 hours into the hike (somewhere around our 4th or 5th ridge...I forget..) and we all had to stop and struggle into a variety of ponchos and raincoats. After which the rain petered out to a drizzle in 30min....

We were very glad to see the car again at the trail head, for it meant hot showers! and hot food! and chocolate cake! and nice comfy beds! Such a luxury trip...sighs.... And the first time we finished hiking at 3+pm too!

Back at base-bungalow, Ming plucked the leech off his ankle and we all watched in morbid fascination as its life slowly ebbed away in a pool of Cuticura.. Dinner and drinks at the town centre left us strangely unsatisfied and we prepared 2 rounds of roesti for supper! It's a wonder the caretaker didn't smell anything at all.

Ming and I agreed to wake up earlier to hike the Henmant Trail to do some late birding, and we trooped off to bed early after filming a short video of Des snoring (it has to be seen to be believed).

Trek rating:
Stamina- ** (unless you were trying to run with the guys...then it's ***)
Technicality- *
Quality of rest stops- **(well actually, unless you call standing around panting resting....)
Amnesia rating- *** (quite an easy trek, a bit of pain about the constant climbing and descending)