Showing posts from September, 2006
Show All 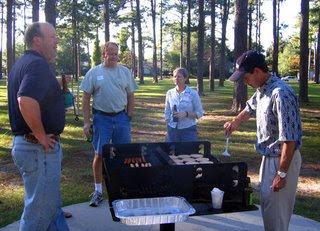 The Bio and Marine Bio Dept at UNCW hosted a Fall Picnic today at Hugh McRae Park. Free-flow of burgers, hotdogs, desserts and side dishes... What's not to like?

Queuing up to get the delicious burgers!
The lady on the left is Tracie Chadwick, the department's graduate secretary,
and a great help to all of us!

CMS folks (from right): Steve, my labmate, Mike, Joanna and Adrienne.
Cassie's at the back! She's in my pop ecology class.

When I was considering coming home, realised that it probably wasn't such a good idea to park so far from the main road! Now I had to navigate through pine trees and cars in the darkness. Thankfully (phew!), Susanna offered to drive my car out to the main road, haha! And I made it home in one piece (plus managed to tarpau one bottle of Sam Adams!) 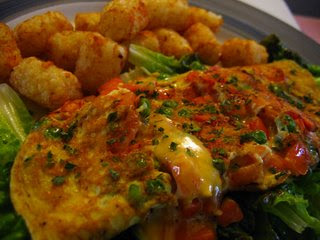 After msn-ing Zee one day, I rediscovered the joy of frozen foods, such as tater tots! They're like hashbrowns, except with greater crispy surface area to volume ratio, haha! This is a simple omelette with tomatoes, frozen mixed veggies, and cheese.

These days, I'm cooking larger quantities of food and freezing them in single portions, rather than cooking a fresh meal each time, which can be a tiring chore after a day at school or work.
6 comments
Read more 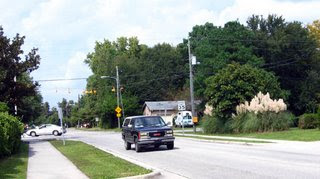 Many people have commented on my kitchen already, so here's the rest of my apartment. :)

I live in a small studio apartment near campus, so small that when you open the door, basically you see all the way to the end, where the bed is. But one advantage of that is that it's easy to vacuum!

That's my block! My apartment faces the main road.
Yeah, it's very noisy with the traffic, especially when the emergency vehicles screech by.

Unfortunately, I didn't get a corner unit, so I only have a small window strip, and the room is always dark. I guess one drawback of a studio is that the fridge is waaay too accessible!

At least I have a rather nice view. The window faces a stand of pine trees. No birdy-like organisms flitting about yet!

I'm growing chili on my windowsill! 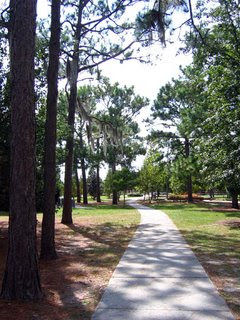 I realised that I've not posted anything about my campus yet! Went out taking pictures on Sunday, as it was such a nice sunny day. No squirrels out and about though.

This is the path I take to the library. There are lots of pine trees on campus, so it has quite a woodsy feel about it.


There's only one library on campus, but it has a good collection (plus a graduate student computer lab, so don't have to wrangle terminals from the undergrads!), and anything we can't find in the library itself, the librarians will get for us! It has a pretty good DVD collection too (haha, free entertainment), including anime series. Unfortunately, I'm not too keen on Evangelion.

The buildings here have to follow the traditional Georgian style architecture, so they're mostly red brick with white trimming and arches. Looks rather stately and aesthetically pleasing...but it makes it difficult to figure out which building is which!!

September 25, 2006
Was driving home from the Center for Marine Science and saw 3 deers (a small family?) crossing the road! Wow! Wild animals, haha, suaku me. In the first week of walking to campus also spotted a small mammal (a raccoon?) darting across my path and into the woody area.

Okay, so it's nothing like seeing zebras and giraffes graze by the roadside in East Africa, but it's still pretty exciting to me!
5 comments
Read more

September 22, 2006
Just came back from the 7pm screening of Pirates of Caribbean 2 at the campus cinema. Yup, it's a proper cinema, and tickets are only US$2 per student, and today, we even had free food and lemonade, every grad student's ideal situation! Yeah! So I settled my dinner and watched a movie at the same time! Next week they'll be screening The Devil Wears Prada, guess I'll be there!
6 comments
Read more

Poo-ey, am I out of shape or what?

September 20, 2006
Did my dive checkout today at the UNCW swimming pool, so that I can be a certified scientific research diver. After my written test (which I passed, phew), had to:

1. Swim 400 yards
2. Swim ~10m on a single breath
3. Tread water for 2min with hands out of water, or 10min using hands
4. Complete a diving checkout, including mask clearance, regulator and BCD removal and replacement, buddy breathing, and rescue an unconscious diver, plus emergency breathing on surface while towing.

Arghhh...I can't tread water for nuts!!! Was going to try the 2min one but had to give up after 1min 30s, boohoo.... so close....but was gonna go under if I didn't use my hands already. Man...those were 10 looooong minutes! And I was so tired after the treading that I couldn't push myself onto the pool deck and had to use the stairs. Aiyoh, so jialak....

The gear was pretty cool! Instead of a Scubapro AirII system, the inflator hose had the usual connection with the BC, with the octopus attached to it! S…
2 comments
Read more

What biologists do when they are bored.... 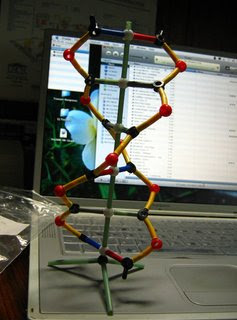 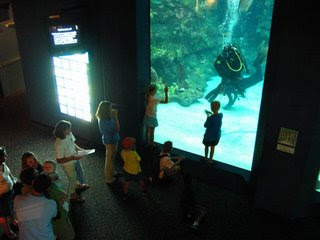 Even though Eric was here for more a month, we only had the chance to jalan-jalan in the last one week of his visit! Probably because we spent so much time and effort in looking for a car, and then practising how to drive. After I got my licence, that was the time we actually went exploring around Wilmington!

It's quite pretty around here, especially with bright green pines juxtaposed against blue blue cloudless sky. Especially after the wet and sodden episode with Ernesto, was glad for some sun!

First, a visit to the NC Fort Fisher Aquarium!

Packed a picnic box to bring to Carolina Beach State Park, which encloses a pretty forest with trails and campgrounds. And there are native carnivorous plants here such as the Venus fly-trap!!! Pitcher plants!!! Sundews!!!! Wah...and according to the signboard, in spring it is abundant with wildflowers (:P~~~). Unfortunately, together with all those exciting stuff, the forest also has TICKS...and I was dressed in shorts in slippers.....

Does this mean something?

September 13, 2006
Something struck me while I was preparing tomorrow's lesson plans for Genetics lab and thinking up wicked questions for next week's quiz for my students.. (well, not really, I'm actually a softie at heart who wants her students to do well, hahaha...). For someone who always professed to having a mild phobia to teaching, I've been doing a lot of teaching in the last 6-7 years or so!

It started with being a nature guide talking to all those strangers about wildlife and conservation, to conducting sessions on how to be a nature guide, and all those courses on Reef Check and whatnot, plus instructing for educational companies like Creative Kids, where I had to teach primary and secondary students, all the way to trainee teachers and full-time teachers! Recently have also been teaching at NUS and here in Wilmington!

I had a 'what are you planning to do with your life after you graduate' talk with my current supervisor recently, and mentioned that I don't really se…
4 comments
Read more

September 12, 2006
Just finished my first exam yesterday....It's been yonks since I've had a exam, not counting all the driving theory tests, haven't had that hand cramp from furiously scribbling for some time :). One thing I like about studying Biology is that since I enjoy my courses, exams are generally not that bad, 'cos I already have an interest in the content. Well, I haven't got my grades back yet, hyak hyak, so might be singing a different tune in a week's time...
2 comments
Read more

Dinner with Marianne and Gray 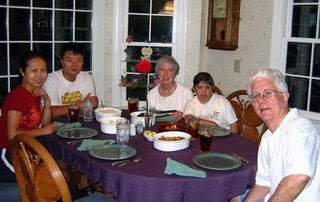 Had dinner at Marianne and Gray's place today. They are the host family of Chen Wei and Lifang, and wanted to meet up with Eric and me, and they even sent us to the airport last Monday when Eric had to return to Singapore.

Today's dinner was a surprise as Marianne cooked Chinese! She had prepared kungpao chicken and rice, and had a another surprise for us- we were supposed to cook the vegetables! Lifang stir-fried the mushrooms with assorted veggies, and since I had a load of cabbage on my hands, decided to do a simple stir-fry with garlic, Kikkoman and Thai fish sauce (yup, didn't expect to see that in Marianne's fridge!). Thankfully, they seem to like the last minute cabbage, and most of it was eaten :).

Marianne thought the moon was really beautiful tonight and suggested that we traipse down to the beach and enjoy the view! So we did!

Well, too bad I didn't have a tripod, but it was a lovely an…
3 comments
Read more

I met a cute guy at the beach the other day.... 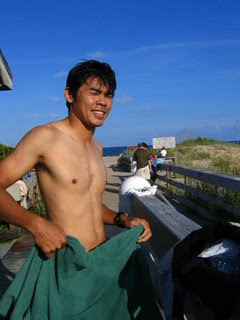 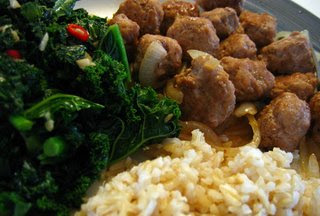 I'm entering into a food photography phase, so you'll just have to bear with me through this. :) I figure this is one way to motivate myself to cook healthy, tasty and nutritious meals while living alone, instead of instant foods and scooping stuff outta cans.

Had a craving for soft fried onions today, so made stir-fried meatballs with onions, one of my fave comfort foods. So simple, and pretty satisfying. Added a dash of chili pepper into the meat mixture for some extra spice.


The green stuff you see at the side is kale. What is kale? you may ask. Something like kailan? Well it does taste similar to kailan, only much tougher, as I found out when I first attempted to cook it. This time round, I peeled the stems, chopped the kale into smaller pieces, and steamed it in its juices for a longer time. Not too bad, especially when cooked with fresh chili slices, which I got from my chili plant! I decided that buying 6 chilis at US$3.99 a pop was just too much, and got myself a plant i…
Post a Comment
Read more 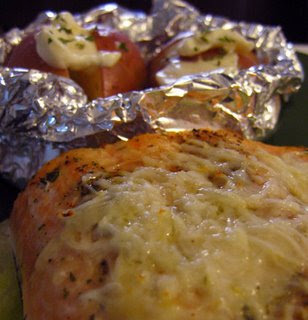 ...is baked salmon with cheese, served on a bed of iceberg lettuce and a side of roasted red potatoes seasoned with fresh rosemary! 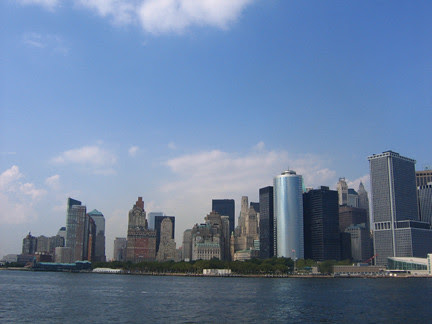 Sorry about the long wait folks...I'm finally blogging about my arrival in the States.

July 31, 6am:
Stumbled out of the Thai Airways plane into JFK Airport. After 20+ hours in cramped and dark conditions, I'm finally in the US!!

Decided to stopover in New York as I've never been here before and wanted to see all the famous sights. So here they are-

Manhattan
Took a shuttle from the airport down to Manhattan. At first we thought it would be the quickest way, but we went all over Manhattan dropping people off at various hotels and hostels, so it was almost 10am by the time we checked in at Harlem YMCA. Not too bad, except that there was no a/c and NY was experiencing a heatwave!! It was sweltering in the small room. Washed up a little and proceeded to our first destination...

Well, that's the view from the top. For some reason I don't seem to have a photo of the building itself. Think I was jetlagged and starting to get mild heatstroke....You hav…
5 comments
Read more 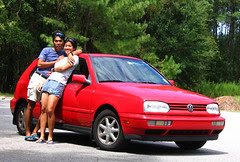 Us and the car
Originally uploaded by diploastrea. Heh, I don't know what got into me, but I went and bought a BRIGHT RED CAR!!! Don't you think it's really cute though?
5 comments
Read more

September 04, 2006
Eric left for New York-Bangkok-Singapore at 6.30am this morning. It's 7.19am, and already the apartment feels different without him around... Sigh... It'll be a long 3 months. Going to sleep, only slept 2 hours before waking at 4am to go to the airport.
Post a Comment
Read more
More posts