June 08, 2006
Was browsing through my friend's online photo album today, and was absolutely horrified by the carnage in the photos of Raffles Lighthouse!! It looked as though a boat had rammed into the fringing coral reef there, smashing hard coral colonies to pieces and overturning the boulder corals. Here are some of her photos: 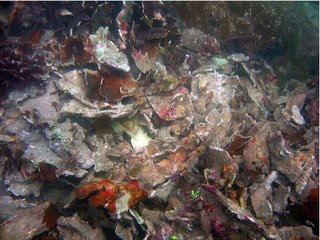 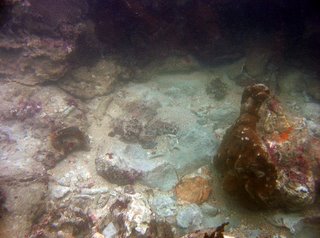 Overturned Porites coral boulder, and a gap on the reef flat 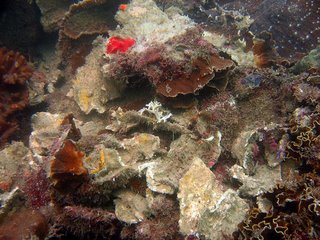 A smash and run?
Why am I so upset?

I have dived frequently at Raffles Lighthouse from 2000, it was one of my study sites and a survey site for the Blue Water Volunteers. RL is (or was) a really special place, with one of the highest percentages of coral cover in Singapore, and a wide variety of hard coral species, including staghorn coral (Acropora spp.), which is otherwise rarely seen in Singapore. The reefs of RL could also be important sources of larvae to replenish the other reefs, as there is a mass coral-spawning event happening there in March/April every year. Not to mention, that the reefs are just really beautiful, awash in colour and shimmering with a multitide of fish and marine life, like this!

BTW, heard that this particular Acropora colony was also dislodged and currently upside-down in a crevice.

Hard corals are really important to a coral reef. They're its backbone, providing habitat, mating grounds, shelter, food, nutrient recycling, etc etc etc... Despite all their importance, they grow ever so slowly, some only reaching 1cm/year. Imagine all the years of tenacious growth smashed apart so instantly.... It causes quite a lot of heartpain.

How could this happen???

Raffles Lighthouse is a restricted area. We have to obtain permits from MPA whenever we carry out surveys there. As far as I know, no leisure boaters or fishermen are allowed within 200m of the island. One would think that Raffles Lighthouse thus receives a high level of protection, but as the Sipadan case showed us, it takes more than words and legislation to protect a reef.