Dinner with Marianne and Gray

September 09, 2006
Had dinner at Marianne and Gray's place today. They are the host family of Chen Wei and Lifang, and wanted to meet up with Eric and me, and they even sent us to the airport last Monday when Eric had to return to Singapore.

Today's dinner was a surprise as Marianne cooked Chinese! She had prepared kungpao chicken and rice, and had a another surprise for us- we were supposed to cook the vegetables! Lifang stir-fried the mushrooms with assorted veggies, and since I had a load of cabbage on my hands, decided to do a simple stir-fry with garlic, Kikkoman and Thai fish sauce (yup, didn't expect to see that in Marianne's fridge!). Thankfully, they seem to like the last minute cabbage, and most of it was eaten :). 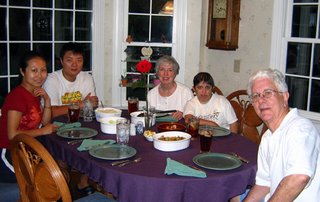 
Marianne thought the moon was really beautiful tonight and suggested that we traipse down to the beach and enjoy the view! So we did! 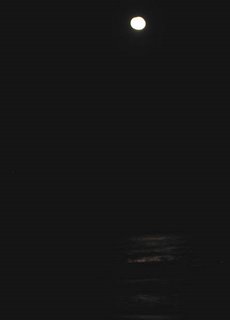 Well, too bad I didn't have a tripod, but it was a lovely and breezy night.

Irene Arboleda said…
Went to the Chinese Supermarket yesterday and headed straight to the fish section for some filleted salmon...had steaks instead, will try out your cheesy baked, sounds eally good!
7:10 am

bluebabe said…
How did it go?? I should have baked it some more, till the cheese browns and becomes crispy!
8:26 pm

eric yw lim said…
wished i was there to savour all the good food. if i was there at the beach, i would have volunteered to be yr tripod :)
12:33 pm