September 26, 2006
I realised that I've not posted anything about my campus yet! Went out taking pictures on Sunday, as it was such a nice sunny day. No squirrels out and about though.

This is the path I take to the library. There are lots of pine trees on campus, so it has quite a woodsy feel about it. 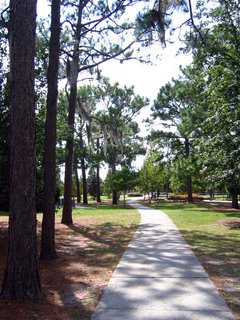 There's only one library on campus, but it has a good collection (plus a graduate student computer lab, so don't have to wrangle terminals from the undergrads!), and anything we can't find in the library itself, the librarians will get for us! It has a pretty good DVD collection too (haha, free entertainment), including anime series. Unfortunately, I'm not too keen on Evangelion. 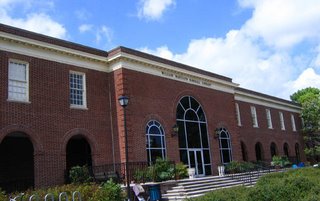 
The buildings here have to follow the traditional Georgian style architecture, so they're mostly red brick with white trimming and arches. Looks rather stately and aesthetically pleasing...but it makes it difficult to figure out which building is which!! 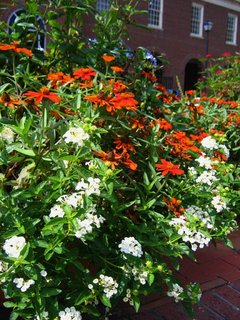 Pretty flowers outside the library. Another thing I like about campus is that there're many flowers growing everywhere! It's so pretty, and the rose bushes outside the Bio Dept (Dobo Hall) are blooming too. Can't wait to see what spring is like. 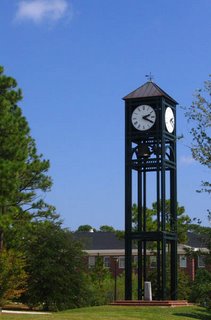 The clock tower outside the library 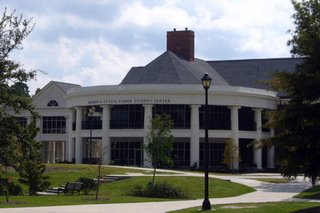 The new Fisher Student Center, which has a cinema, pool hall, table tennis tables and the uni bookstore.
The UNCW water tower is like a major landmark around here. When I first arrived, I used it to orientate myself whenever I'm on campus! Now, I use it to note where the general direction of campus is when I'm out driving. Yup, Wilmington is that flat... 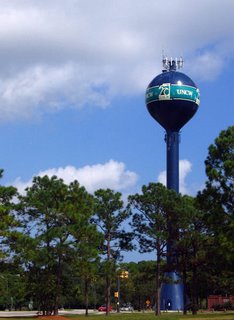 eric yw lim said…
Haha... seems like u are trying to sell yr apartment with all the fotos :) nevertheless, i can see u put a lot of heart and soul into taking them. Boy..your bath tub is sparkling white ! very inviting ;P
2:18 pm